April 03, 2018
We are busy in rehearsal for our up-coming tour of dance and music performance work:
'Light Steps' for young audiences 2 to 5+ years and their families.
'Found' for young audiences  4 to 7+ years and their families.
Both performance works have been co-created with young people. Light Steps was inspired by the Turner Contemporary, Margate Summer of Colour exhibit of work by Spencer Finch in 2014. We worked with the Reception classes of a local primary school to research and develop what has now become the performance work 'Light Steps'.

'Found' developed from a larger project working with three Museums and three schools in 2016. This larger project was called the ILA project we again worked with the young people to co-create the story and elements of the final performance work 'Found'. You can see the steps of the making of Found at www.ilaproject.com

We are now in rehearsal getting the artistic team ready for an exciting tour later this year. 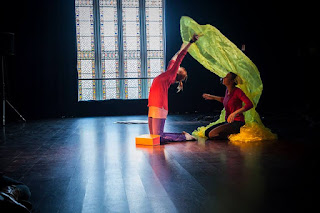 Popular posts from this blog

October 05, 2020
C onquering parameters: a scherzo for pandemical times  This exciting Associate Artist project has grasped summer 2020 and made art out of it, across the lock-down.  There will be a  presentation  of the work with partners London Studio  Centre.  Presented - Friday 16 October, 7pm (TBC). This will be through London Studio Centre's Instagram account.
Post a Comment
Read more

July 10, 2020
Queering the Somatic In November 2019  Dr. Adesola Akinleye  and  Helen Kindred , co-Artistic Directors of DancingStrong Movement Lab and Senior Lecturers at Middlesex University London, curated a two-day symposium - Queering the Somatic: interrupting the narrative - which brought together artists, practitioners, researchers moving within the fields of dance, queer theory, feminism, narrative, and somatic practices. Here they introduce the following articles which are contributed by some of the Symposium’s speakers.  https://www.communitydance.org.uk/DB/animated-editions/summer-2020 See our editorial here:  https://www.communitydance.org.uk/DB/animated-library/queering-the-somatic?ed=44830  See Helen's article here:  https://www.communitydance.org.uk/DB/animated-library/improvisation-and-change?ed=44830 Our sincere thanks to all the contributors to this edition of Animated: Vicki Igbokwe, Melanie Precious, Sarah Boulton and Adele Wragg, Dr Mark Edward, Dr Adseola Akinleye,
Post a Comment
Read more